More from Abby, one of our current scholars, about her recent expedition …

On March 12, I went with the JBG Garden Club on their botanizing expedition to Mount Gilboa (in the north of Israel, in Lower Galilee).  We were seeking Iris haynei also known as the Gilboa Iris. Upon arrival to the base of the mountain, we scattered searching excitedly for orchis sp. and other interesting wildflowers.  However, our guide Hagar did not allow us to wander far and she soon called  us to climb the mountain. Following the trail, we descended first into a meadow before hiking up the winding track. The day was warm and overcast. The clouds blew swiftly across the grey sky, running before a swift breeze. It cooled our sweaty faces and made the trees sway gently. We were hiking through tall grass that was a vibrant green. Swathes of golden-yellow mustard plants ran in rivers through the oaks. A sweet floral smell filled the air, it was the wild  Mustard. Birds sang gaily in the meadow and cows grazed lazily behind a fence. Watching for Iris among this idyllic scene was hard, I wanted to stop, relax,and enjoy this beautiful area!

As we hiked upward, the meadow was left behind and the rocky summit appeared. Boulders became more apparent and pine trees began to dominate the landscape.Then I saw my first Iris haynei. This beautiful plant was clinging to life among the rocky slopes, its roots buried deep in a rock crevasse.  After the initial sighting, I began to see many more of these lovely flowers. As we ascended, we soon began seeing hundreds if not a thousand Irises, some in clumps of 15 and 20, others flowering singly or in pairs. Vivid purple Irises were scattered everywhere on the mountain. The rich green of the trees, the tan rock, and the Gilboa Iris created a beautiful picture.

The plants varied dramatically by height, shape, and color. They ranged  from 12 to 36 inches tall. The flower size varied as well. Some were only 3-4 inches across while others were bigger than the average hand! Some flowers were fragrant and smelled of jasmine, or (strangely) hot chocolate. Other flowers had no fragrance at all. The range of colors was breathtaking as well. All were striped and speckled in various patterns. Flowers in hues of brown and purple were in abundance, though I saw many that were a plain royal purple and others were simply delicate shades of pink. There was even one isolated patch that was nearly white accentuated by brown falls.

Meandering through this incredible landscape examining such wonderful wild specimens was exhilarating. I never thought that I would be able to see Iris in the wild. Yet here I was surrounded by these magnificent creations, on a beautiful mountain in the lovely land of Israel.

From Abby, one of our current scholars …

Shalom from the Jerusalem Botanic Gardens!

On Wednesday the 8th I went with the JBG’s Garden Club to the hills surrounding Jerusalem. We were hunting the elusive orchids. Some of these special flowers are rare in this country and are sly sneaky creatures. They need an experienced tracker to discover their hiding places. When we arrived at our first location, I realized how brilliantly clever these rare orchids actually are. They employ the use of decoys. In order that one be led astray into the mire of despair, these horticultural devils will reseed freely.

Leaves soon sprout up in obvious places leading even the most experienced plant hunter to hope for a flower sighting. However, even though the leaves may be of magnificent proportions there is no blossom. The sneaky beauties will flower instead inside a wild Asparagus, a Rose bush, a Scrophularia, or an Astralagus. All of these aforementioned botanical wonders have thorns of truly spectacular sizes and shapes. Long thin needles resembling porcupine quills, rows of short prickles resembling sharks teeth (with the same bite) and some in-between the two, just to spite the despairing orchid lover.

We were in search of around 6 different kinds of orchids that day. We climbed many mountains, forded many streams, followed every rainbow, until we found our dreams!!   It took quite a bit of effort, but eventually we began finding the ‘dumb’ orchids, the ones that are being weeded (!) out of the gene pool. These are the ones that bloom in the middle of the path, flower by the natural gas pipeline and cast their seed in parking lots. 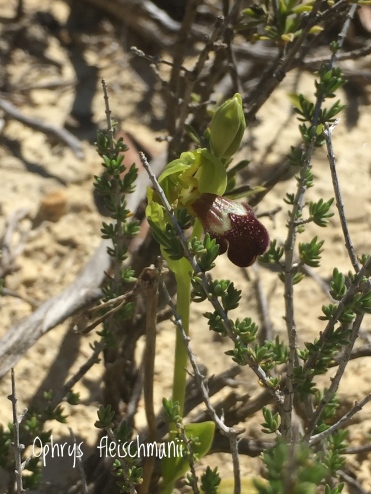 In due course, through careful searching, we found most of the  orchids that this region of Israel has to offer. We found the striking Orchis laxiflora, this charmer was growing next to the pipeline. Next on our list was Ophrys umbilical, this one was inhabiting the parking lot. Close by, growing by the sidewalk, was its cousin Ophrys transhyrcana. Occupying the thorny confines of a Scrophularia was Orchis anatolica. Down the slope was Orchis papilionacea, and Ophrys fleischmanii. Orchis galilea was the last one to show its face. Even though it took nearly 4 hours to complete, we were successful in hunting these evasive yet charming plants. It was fun to see these native Israeli orchids in their natural habitat. 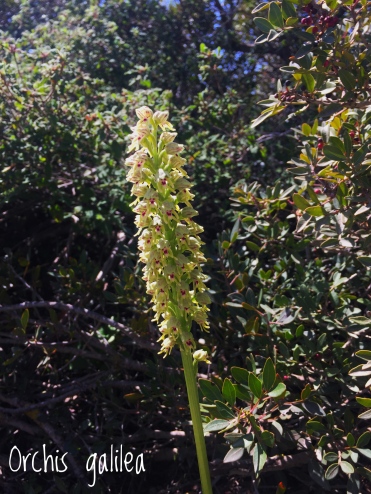 After our fruitful search, we congratulated ourselves on our success and began bandaging all the cuts and gashes caused by hopeful wading in thorny undergrowth seeking these phantasmic flowers.